A Sequence for the Ascension 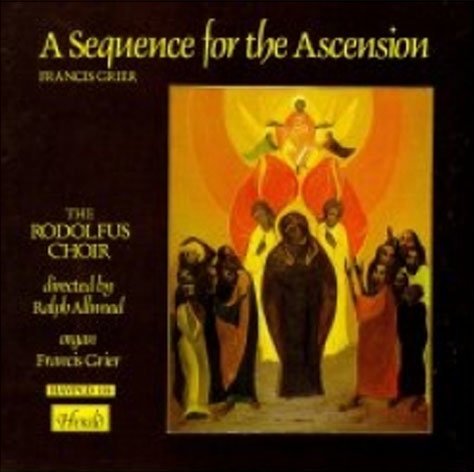 1. Introit: Rejoice, thou Mother of Christ our God
2. Prayer: The Lord Ascended into Heaven
3. Organ solo: Christ in his glory at God’s right hand
4. Old Testament Reading: II Kings 2:1–12
5. Psalm 113 with Antiphon
6. Responsory: I am ascending to my Father
7. New Testament Reading: Acts 1:1–11
8. Prayer: O Christ, you ascended into glory
9. Responsory: Christ ascends with shouts of glory
10. Carol: The Lord goes up with shouts of joy
11. Magnificat and Antiphon
12. New Testament Reading: Ephesians 1:17—23
13. Motet: Now the Son of Man has been glorified
14. Blessing: The Angels were seen by the Apostles
15. Prayers: O the strangest of wonders, O you who are the mother of God
16. Recessional: Rejoice, thou Mother of Christ our God

The idea for writing this Sequence came to me when I attended a sequence recorded for the BBC be the third Eton Choral Course in the summer of 1989. I devised a sequence for Ascension-tide m which the different choral forms and solo organ pieces give it musical variety within the intrinsic unity of a single composer’s work. The Provost and Fellows of Eton College commissioned it for part of the celebrations marking Eton’s 550th anniversary; it was first performed on 18th May 1990 and subsequently broadcast by the BBC on 26th May.

The Sequence is in the form of a service, based on the tradition that the Virgin Mary was present at the Ascension. It leads towards a setting of the Magnificat as the dramatic peak of quiet contemplation, rather than the obvious climax of the Ascension itself, and ends with a section of devotion to the Mother of God. This can be compared to the experience of entering a great Gothic cathedral and walking from the west end, up the nave, through the quire to a grand high altar, and finding, hidden behind it, the lady chapel.

I have become increasingly interested in the visual aspect of liturgy, and the display of an icon, like the one painted by Anjali d’Souza which is reproduced on the front of this CD, is as important a part of the performance as the lighting of candles or incense. My sources for the work are ecumenical. Much comes from Orthodoxy, especially the role of the icon, which was the main denominational inspiration. The prayers of the Orthodox Church are so rich in poetic and symbolic imagery that I often eschew polyphonic settings, so that the words may make their full impact.

The singing of the Magnificat with its antiphon is Catholic, and the reverencing of the icon during the Magnificat with candles and incense and, during church performance, asking people to stand or kneel for it, is inspired by similar liturgical actions in Catholic liturgy for high feast-days. For the first performance, the setting of Eton College Chapel was of course Anglican, and the Sequence alludes to the Mother of God as the dedicatory saint of the Chapel and College. Only the Anglican Church would be so open to this kind of liturgical experimentation, and its stamp is also on the readings, which are all taken from the Authorised Version of the Bible.

Anjali d’Souza’s painting of the Ascension is based on one of the traditional Orthodox icons of this festival; n is not a reproduction or a copy but an evolution from the tradition. There are three main elements in its content: the ascending Christ, his mother, and the witnesses consisting of the apostles and the angels. Christ is depicted in all his divine glory, and so the focus of the first part of the Sequence is on his sheer magnificence. Then the witnesses tell their story in the reading of the lessons and in the chant, the lower voices symbolizing the Old Testament writers, and the upper voices the purity of the angels and the New Testament. The Carol is like a joyous dance in which all participate in celebrating the festival. But it is the Mother of God who dominates the painting, even more than her Son. This is because she represents the Church, which now, as Christ himself leaves the earth for the heavens, becomes his mystical body. This is the greatest mystery of the Ascension, and yet it can be known only by contemplating the inner significance of the festival, for it is not a part of its overt expression. Thus, as the Sequence continues, it becomes increasingly focussed on the figure of the Mother of God, and its character becomes more and more contemplative and reflective. It is for this reason that the singing of the Magnificat with its antiphon, while lighting candles and incense, is the liturgical climax of the Sequence.
© 1992 Francis Grier